CIM paper about women in marketing

I’ve read the paper with interest and browsed the LinkedIn threads with curiosity. Unfortunately, there wasn’t nearly as much debate as I expected – or as I had hoped for.(Maybe everyone is writing about it in their own blogs instead of debating it on LindedIn…)

The problem is common to other professions: although at graduate and junior level there is broadly gender parity, the Office of National Statistics reports that in 2012 only 23% of marketing and sales directors were female. And at CEO and board level, the situation only gets worse. So for whatever reasons, several of them mentioned in my previous post about Sheryl Sandberg’s book, women aren’t making it to the top. In a similar vein and not with great surprise, salary disparities also persist, particularly at the top end of the profession, with men earning more than women in equivalent seniority levels and roles.There isn’t much new data or new commissioned research in the CIM paper, but there are good references to recent material. Reading through the paper, the different sources and the LinkedIn group, there were two particular points I caught sight of and which I wanted to share here.

The first point has to do with the pay off for organisations that care about getting more women into senior roles. The second point is about anecdotal evidence of women’s common responses when  asked about the problem.

One of the sources, a Thomson Reuters paper about women in the workplace, is particularly compelling and provides an interesting starting point: 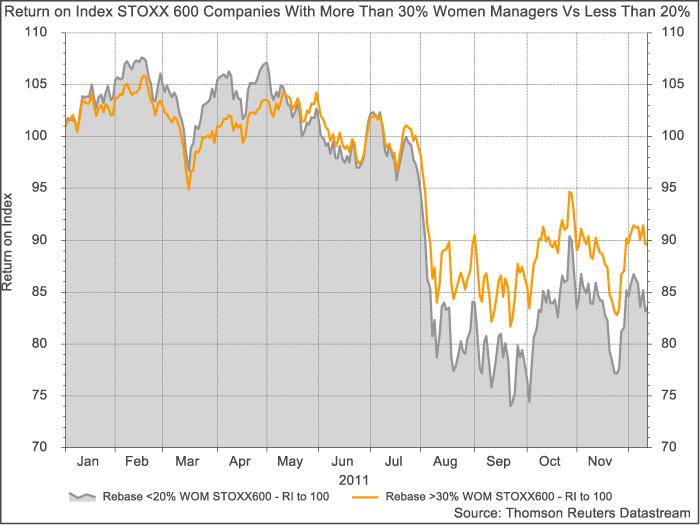 The graph shows that at the beginning of 2011, when the market was stronger, returns on the stocks of the first category either tracked those on the second category or lagged slightly. But at the height of the European debt crisis later in 2011, the companies with more women in management were remarkably consistent in offering superior returns to investors.

Let’s look at a different data set, this time expanding the analysis to the 1,600 companies in the MSCI Global index of publicly traded corporations. The orange line represents the 152 companies that reported in 2010 that more than 30% of their managers were women, and in grey the 184 corporations that reported fewer than 20%. By focusing on the time frame between April and November, the positive impact of more women becomes even more evident: 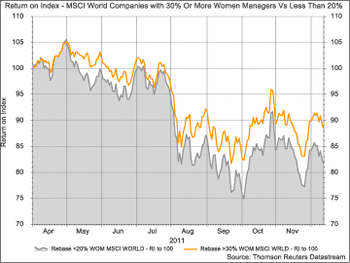 The graphs seem to indicate higher resilience in volatile times for organisations with more women at the top. Could this be related to women’s attitudes to risk, and/or more balanced management strategies?

There are limitations with these data sets. The author of the paper fully acknowledges them. One of the main issues is that companies don’t usually disclose data on women’s participation in the workforce. Let’s also not forget that correlation doesn’t mean causality, so much more work would need to be done in order to discount other factors affecting performance.

However, the graphs are still thought-provoking. We need to get more long-term data and analyse it. Perhaps an underlying culture of challenging top managerial stereotypes, of stimulating diversity, is what will contribute more strongly to good, resilient organisational performance.

Point 2: how contrived women’s reactions are when they’re confronted with the problem.

The CIM paper provides a list of suggestions to address the problem of lack of women in top management roles:

If you ask me, these all sound great! Some to a greater extent than others, but because of the depth and breadth of the problem I’d say bring them all on NOW, and if something doesn’t work as we expected let’s try to fix it and/or look for other solutions.

However, when seeing commonplace reactions in the workplace to some of these issues, and reading the comments in CIM’s LinkedIn page, I quickly realise women’s reluctance to support some solutions. Firstly, having a few women at the top seems to mitigate the perception of unfairness. I mean, one is always better than none of course, but let’s not get our party hats out! Secondly, getting to the top ‘on merit alone’ is seen as more acceptable than trying to address the factors which may be creating the difference in numbers in the first place. This shows a strange belief that we live in a true meritocracy; that all those who put the effort in, male or female, will be justly rewarded. Wow, is that really the case?

I’d certainly challenge the broad assumption. In specific, I think the criteria of adequacy for top management roles, the desirable personal qualities and skills to be a CMO or a CEO, the perception and projection of success, are so skewed towards a male role model, that an invisible bias is already built-in the system. Denying or failing to see this bias could only curtail our efforts to solve the problem.

Today I was reading about Tesco’s recent job cuts in marketing. Allegedly they have made more than 50 senior and middle managers redundant at its head office. Of the eight names quoted in the article, including two departures, five recent hires and one CEO – all names were male.

About
The Marketing Cube is a marketing, brand and digital consultancy service based in London. Please note that we're not accepting new clients at the moment. However, the blog is still active and available for your perusal!
Latest from our blog
Jan
2017: what will be trending in digital marketing

Ladies and gentlemen, as has been my tradition for the last...

I haven't touched much on the pensions and retirement...